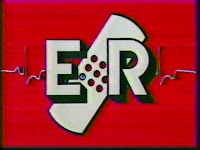 Dr. Sheinfeld, newly divorced, becomes physician on call at the emergency room of a Chicago hospital. He soon locks horns with the vivacious Dr. Eve Sheridan and attracts the puppy-love of (pediatrics) Nurse Cory. Situational humor mixes with tense medical crises. Weak writing but great casting, many familiar faces not only among the regular cast but also look for some strong guest appearances. 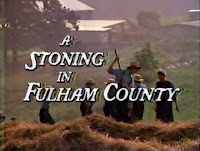 When the baby daughter of an Amish couple is killed by a gang of rock-throwing teenagers, their anguish is virtually laughed off by the rest of the locals.

Posted by TVRepeater at 11:00 PM No comments:

A 1975 made-for-TV movie, starring Lloyd Bridges among others. The basic plot centers around a pre-teen boy who sneaks onto an Apollo-like mission to the moon. 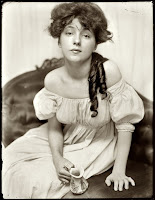 Originally aired as an installment of the highly acclaimed PBS series "The American Experience", this is the story of the murder that scandalized New York society at the turn of the century.

The documentary tells the story of the beautiful Evelyn Nesbit, famous stage actress and "Gibson Girl", and her role in the murder of New York's leading architect, Stanford White.

First White's lover, the social climbing Nesbit eventually married the eccentric heir to a railroad fortune, Harry K. Thaw. Thaw was obsessed by White, hated him, and hated the fact that his wife had one been White's lover. Nesbit played off Thaw's jealousy until it led to murder.

The documentary is wonderful, and shows the feeding frenzy of the turn-of-the-century press, on which CNN has nothing. 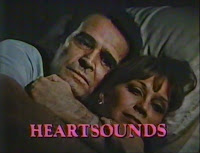 Doctors and nurses are the very stuff of television uplift. From ''Dr. Kildare'' and ''Marcus Welby, M.D.'' to ''Nurse'' and ''St. Elsewhere,'' the medical profession has furnished scriptwriters with a seemingly endless flow of selfless dedication in the face of awesome life-and-death crises. Even television comedies such as ''M*A*S*H'' or the current ''E/R'' have carefully mixed their laugh tracks with basic respect and admiration.

Meanwhile, few of us are not familiar with hospital disaster stories, the kind that may involve a confused patient being prepared for, and possibly given, the wrong operation. Nurses have been known to smirk at the pretensions and questionable practices of some doctors. And I know of at least one doctor who, when a close relative is hospitalized, bars nurses from the patient's room, convinced that they are likely to get the prescribed medications wrong. All of which might be filed under the always safe observation of ''nobody's perfect.'' Such reservations are pointedly avoided, however, in the indictments leveled in ''Heartsounds,'' the TV movie that stars Mary Tyler Moore and James Garner on ABC tonight at 9.

Fay Kanin's script is based on a book written by Martha Weinman Lear. Published in 1980, the story tells how Mrs. Lear's husband Hal spent the final five years of his life after suffering a massive heart attack in 1973. In many respects, Martha and Hal are not your average couple. He was a successful doctor, a urologist, in Hartford, before coming to New York to set up an experimental program in sex therapy at a major hospital. He was divorced and had two children when he married Martha in the early 1960's. She is about 10 years younger than Hal and has worked in various editorial and freelance writing capacities for publications that include The New York Times. His first heart attack occurs when she is working on an assignment in Italy. An editor suggests that she keep a written record of the entire experience. When friends discover she is taking voluminous notes, it isn't difficult to conclude that there must be a book lurking somewhere down the road.

On its most immediate level, ''Heartsounds'' is a love story about two people completely attached to each other. Life is generally good and fulfilling. She likes her work, occasionally getting involved in mildly feminist issues. He is adored by the patients he has helped. The roles of doctor and doctor's wife have their social and economic compensations. On the other hand, she is a New Yorker who does not like living in the ''boondocks'' of Connecticut and that may have had something to do with his taking on the sex project in Manhattan, a project that did not bring the professional advancement that he had been promised. That disappointment, along with a family history of heart problems, was almost certainly a factor in his illness.

When the heart attack strikes, it quickly becomes apparent that Hal and Martha are not the sort of people to go quietly into just any good night. He knows immediately what is happening as, alone in his apartment, some chest discomfort that he at first assumes to be little more than heartburn slowly begins triggering severe pains, mild sweating and a weakened pulse. Unable to get help by phone, he puts on his robe, stumbles to the house elevator and gets the doorman to rush him to the hospital, knowing that he is in serious trouble and that there is no time to wait for an ambulance. The sequence is harrowing, and Mr. Garner is frighteningly convincing. Meanwhile, Martha, reached in Italy, begins rushing home in terror, compiling a list of questions on how to deal with this unanticipated threat to her happiness. She quickly learns, however, that the doctors attending her husband do not necessarily appreciate questions. Their typical attitude is a paternalistic, ''Don't worry, I'll keep you informed.''

But, again, this is not your average couple. With his own medical background, Hal is capable of diagnosing his own symptoms and second-guessing the various experts around him. Martha's background in journalism has trained her to do the appropriate research and pose the uncomfortable questions. His will to live is formidable. Her desire to have him live is just about unrelenting. Together, they can hardly be ignored. Yet, even for their most ardent sympathizers, they can become impossibly annoying and demanding. But their view of themselves and the medical profession has an unflinching clarity. Mrs. Lear's overriding point is simple: ''When a doctor becomes a patient, his perceptions turn inside out.'' Hal finds that other doctors become peripheral figures in the process of recovery, stopping by the bed for a few minutes each day with their familiar questions and incessant prodding, usually performed for the benefit of obsequious interns. Nurses, on the other hand, are seen as true angels of mercy, their passing touches of kindness being of inestimable value to flagging spirits.

Hal's story becomes a veritable nightmare of faulty diagnoses, arrogant attitudes and peculiar ethics. Among the numerous problems recounted by Mrs. Lear is the unwillingness of doctors to blame each other for anything. She refers to this as the Old Boys' Hypocritic Oath. She follows her husband through a series of setbacks, including one harrowing episode where he believes he is on the verge of death in a hospital bed one night but is unable to get a doctor's help for eight hours. ''He begged, he pleaded,'' his wife recalls, ''but they wouldn't listen.'' She begins talking of an ''institutional madness.'' In fact, although the film is outspoken, it avoids some of the book's more specific charges. It does not retain Mrs. Lear's conclusion after that eight-hour experience: ''I marveled, as I had before: He is a doctor; he is white and middle- class; he has a wife who can make demands in his name; he is a private-room patient in a great medical institution; he is gravely sick; what the bloody hell goes on in the wards?''

In purely dramatic terms, ''Heartsounds'' begins to sag about two-thirds of the way through as the ending becomes apparent and the story settles into a succession of inevitable crises. Nevertheless, the film packs something of the wallop of a powerful and unblinking documentary. With superb performances from Miss Moore and Mr. Garner, the highs as well as the lows of the couple's love story survive beautifully intact. And the unusual view of a profession that too often is handled with surgical gloves is refreshingly provocative. Glenn Jordan directed. The executive director is Norman Lear, one of Hal Lear's cousins. 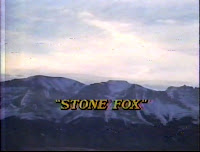 The made-for-TV "The Stone Fox" is set in 1905 Wyoming. Young Joey Cramer is determined to enter his dog--played by a canine named O.J., previously the star of the Disney Family Movie "Skeezer" - in an adult-dominated sledding race. It's all for the sake of Cramer's ailing, destitute grandpa Buddy Ebsen. The boy's competition for the $150 prize is more than formidable: the winner for the past several years has been taciturn Shoshone Indian Stone Fox (Gordon Tootoosis) and his intimidating team of Samoyeds. Filmed in Canada, "The Stone Fox" was originally telecast March 30, 1987--smack-dab opposite the annual Academy Awards ceremony (no wonder you've never heard of the film). ~ Hal Erickson, All Movie Guide 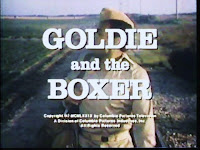 All but forgotten in recent years, the made-for-TV "Goldie and the Boxer" enjoyed a new lease on life when it was resyndicated to TV in the mid-1990s to capitalize on the notoriety of its star, O. J. Simpson. An old-fashioned tearjerker from the Champ school, the film stars Simpson as unknown boxer Joe Gallegher. Spurred by his friendship with Goldie Kellog (Melissa Michaelsen), the 10-year-old daughter of deceased boxing champ Paul Kellog (John Roselius), Joe goes the distance to the Title. Phil Silvers does an "Ed Wynn" as Joe's heart-of-gold trainer. First telecast December 20, 1979, "Goldie and the Boxer" performed well enough to encourage a 1981 sequel, "Goldie and the Boxer Go to Hollywood". ~ Hal Erickson, All Movie Guide