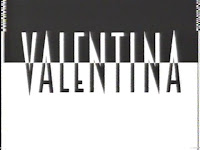 Valentina's look was deliberately patterned after silent film legend Louise Brook. The TV series lasted only one season, between 1988 and 1989.