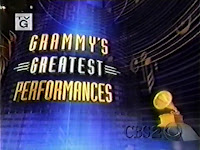 Opening Narration: For 29 years it's been music's biggest night. Careers have been made, achievements celebrated and through it all there have been the greatest performances. Tonight at the end of the century, Grammy looks back on it's highest and most memorable moments. From number 10 to number 1, we'll track the all time highlights of Grammy's past and look at it's future. Tonight, the recording academy proudly presents; Grammy's Greatest Performances, hosted by Natalie Cole and Whitney Houston.

This is excellent front to back and another great example of a buried treasure. No listings or information anywhere short of the Library of Congress and it's an incredible record. The Queen of Soul, Aretha Franklin has 2 entries on the final list, including the top spot. She's #8 for 'Nessum Dorma' in 1998 and #1 for a stellar 1990 performance of her signature hit, "Respect", and it is THE definitive live version. Long live the Queen!