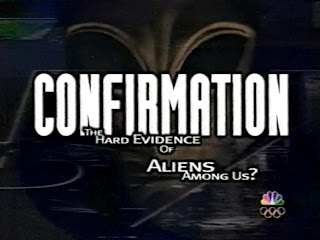 
That was the tagline. I have to laugh since the only unseen footage would be their own shoddy re-creations. And how exactly would we have "seen" this footage? By standing over the shoulder of the working artists fabricating this nonsense? COME ON! If I'm to be intrigued by a claim of "never before seen" it better be closer to this; "Never before seen footage of an ACTUAL alien being" since anything less is just more of the same crapola. Some people saw some lights or heard a thing or whatever. Even the title is ambiguous. Words like "confirmation" and "evidence" with a question mark? Well, is it or isn't it? But that's just me.

Confirmation: The Hard Evidence of Aliens Among Us? (1999) (TV)
Host: Robert Davi
Posted by TVRepeater at 2:03 PM