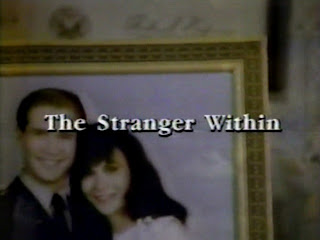 Rick Schroder has, before our eyes, grown into a skillful, intriguing actor. This former child star used his doughy baby face to portray a naive cowpoke in "Lonesome Dove", and, earlier this year, he was convincing as the brave oldest brother in a family of orphans in "Too Young the Hero". Now, in "The Stranger Within", Schroder uses his wide-eyed innocence to become a scary psycho. He plays a teenager who shows up on the doorstep of Kate Jackson ("Charlie's Angels, Baby Boom"), claiming to be her son. Sixteen years earlier, as we see in a flashback, Jackson's baby boy was snatched in a supermarket while her head was turned. Now she has to figure out whether Schroder is telling the truth. And pretty quickly, she hopes to heaven he isn't, because this kid is given to insanely jealous rages and worse: During one of Schroder's fits, Jackson's boyfriend (Chris Sarandon) meets his end in the grisliest ice-fishing scene you've ever seen.

Eventually, Schroder begins menacing Jackson as well, but by then the movie has become hokey and overwrought. Still, director Tom Holland proved with 1989's "Child's Play" that he knew how to make an unsettling horror film. With "The Stranger Within", he proves he can cut back on the gore and still make you jump. B
Reviewed by Ken Tucker | Nov 23, 1990