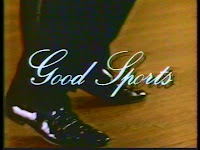 Ultimately the failure of this show can be attributed to the inability of Farrah and Ryan to get a laugh, both are adequate in dramatic roles but COMEDY IS HARD.