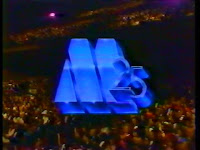 Hosted by Richard Pryor. A high point is the Jackson Brothers all performing together. I don't know who wanted to see Stuart Leslie Goddard (Adam Ant) sing the Motown classic, "Where Did Our Love Go?" but I doubt it was anyone in the audience from their tone. Don't let it get in the way of your enjoyment.