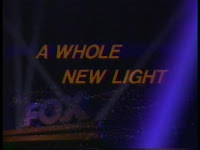 This is classic TV. When the Fox Television Network came to be in 1987, they used this show to preview the newer than new lineup. Very nostalgic viewing. This is a half-hour broadcast, unedited.

On April 5, 1987
History Will Be Made.
Fox Broadcasting
Presents Prime Time
Shows
In A Whole New Light.
For The Next 30 Minutes
You'll See Highlights
From The Debut Episodes
As Fox Broadcasting
Changes The Face Of
Television.