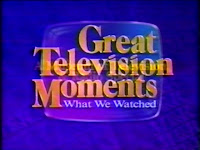 Putting together "Great Television Moments: What We Watched" was a daunting task for its producers.

"My big concern is this show will go on and people will look at it and go, 'Well, that was just two hours of clips,' " said producer-director-co-writer Michael Hirsh, who also produced the 1991 CBS retrospective "Memories of MASH."

"They should only know what goes into doing this."

Though the program was made under the auspices of New York's Museum of Television & Radio, the producers could only use the museum's archives for research purposes. That made for a long process to get the material to use for a clip: They had to find a usable copy and then track down the copyright owner in order to obtain the rights. Then they had to clear it with everyone in the clip.

Some rights owners wouldn't allow clips to be used. "Fred Astaire's widow would not allow us to use one foot of Fred Astaire," said co-executive producer Allan Burns, one of the creators of "The Mary Tyler Moore Show." "Johnny Carson didn't really want to open up everything to us because he is going to do some specials of his own. So he gave us limited access, as did Carol Burnett, because Carol was doing her own (retrospective) show."

Noticeably missing from Barbara Walters' segment is footage of the late NBC newscaster Chet Huntley. Originally, Hirsh wanted to use clips with Huntley announcing the assassinations of President John F. Kennedy and the Rev. Martin Luther King Jr. According to Hirsh, Huntley's widow "wouldn't let us use him unless we paid exorbitantly. I said we can't pay because . . . we are not paying anybody."

There are very few moments from the 1950s, save for clips of the dramas "Marty" and "Requiem for a Heavyweight," and such comedies as "I Love Lucy" and "Your Show of Shows."

"We didn't think people would sit still for them today," Burns said. "What you try to do is give (the audience) a flavor of it. Some of them, honestly--I don't want to name the ones, but certain of those shows from those days just seem very dated."

"One thing we realized is that an awful lot of the audience wasn't around to see the '50s television," said co-executive producer Grant Tinker, former head of MTM and chairman of NBC. "While it may be interesting to some of us who were, we didn't want to turn off a whole part of the audience with too much of that. We mostly wanted to present stuff the bulk of the audience has some ability to remember."

The program, Tinker said, isn't just nostalgia. "It is a little celebratory in that we didn't go for awful television, but better television," he said. "The medium is not always that good, so it is kind of fun to concentrate on the good things."

Hirsh said he tried to give the audience "moments they remember but haven't seen all the time. What we have is the very first moment on 'Gunsmoke.' People may not remember it, but the moment will trigger a lot of thoughts about the show. On the other hand, there are some moments you can't avoid. We have a scene from the 'All in the Family' pilot that set the tone for the series."


Great Television Moments: What We Watched (1993) (TV)
Host: Candice Bergen
Posted by TVRepeater at 11:38 AM