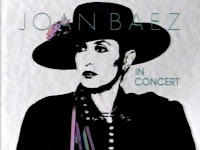 From Wikipedia, the free encyclopedia:
Joan Baez is an American folk singer, songwriter, musician and a prominent activist in the fields of human rights, peace and environmental justice.


Baez has a distinctive vocal style, with a strong vibrato. Her recordings include many topical songs and material dealing with social issues.

Baez began her career performing in coffeehouses in Boston and Cambridge, and rose to fame as an unbilled performer at the 1959 Newport Folk Festival. She began her recording career in 1960, and achieved immediate success. Her first three albums, Joan Baez, Joan Baez, Vol. 2, and Joan Baez in Concert all achieved gold record status, and stayed on the charts for two years.

Baez has had a popular hit song with "Diamonds & Rust" and hit covers of Phil Ochs's "There but for Fortune" and The Band's "The Night They Drove Old Dixie Down". Other songs associated with Baez include "Farewell, Angelina", "Love Is Just a Four-Letter Word", "Joe Hill", "Sweet Sir Galahad" and "We Shall Overcome". She performed three of the songs at the 1969 Woodstock Festival, helped to bring the songs of Bob Dylan to national prominence, and has displayed a lifelong commitment to political and social activism in the fields of nonviolence, civil rights, human rights and the environment.