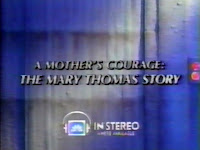 The story of Mary Thomas, the mother of Detroit Pistons star player Isaiah Thomas. As portrayed by Alfre Woodard, Mary is a tireless, feisty single mom, struggling successfully to free her large family from the influence of the poverty and crime surrounding her West Side Chicago neighborhood. Isiah is played at various stages in his life by Garland Spencer and Larry O. Williams. This TV movie builds to an inspiring conclusion as Mary fights city hall to keep her family from being forcibly moved to a violence-ridden housing project. A Mother's Courage: The Mary Thomas Story was originally a two-part presentation of The Disney Sunday Movie, and as such is not always as realistic as its story material warrants. ~ Hal Erickson, Rovi