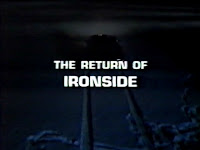 No Rust for 'Ironside'
May 02, 1993|SUSAN KING | TIMES STAFF WRITER
It seemed like old times for the cast of the NBC series "Ironside" (1967-75) when they reunited last winter in Denver to film Tuesday's NBC movie "The Return of Ironside."

"This might sound real strange and corny, but it is just like I saw them all last week," says Elizabeth Bauer, who played policewoman Fran Belding for four seasons. "Everybody looks a little older, but it was exactly the same. No one has changed."

"It was like your entire life was flashing in front of your eyes," quips Don Galloway, who played Det. Sgt. Ed Brown. "It's sort of like when you don't see somebody for 10 years and you suddenly run into them and you pick up with the last conversation you had."

"The Return of Ironside" finds Robert Ironside (Raymond Burr) in his wheelchair but as a retired special consultant for the San Francisco Police Department. No sooner does he retire than his old pal Ed (now deputy chief of the Denver Police Department) asks him to come to the Mile High City to help in the search for a new chief.

While in Denver, the daughter of former associate Eve Whitfield (Barbara Anderson), who now works for Ironside, is accused of fatally shooting two police officers. Ironside calls on Brown, Whitfield and Belding, as well as his former bodyguard-turned-judge Mark Sanger (Don Mitchell), to solve the killings.

Galloway, who has done two "Perry Mason" TV movies with his friend Burr, believes the "Return of Ironside" retains the flavor of the original series. "I think it's a very good script and beautifully directed," he says.

Anderson, who won an Emmy for her portrayal of Eve, says all the cast members were eager to reprise their roles. "I think we were all pretty much adjusted in our own lives at this point in time," says Anderson, who has retired from acting and lives in Santa Fe, N.M., with her husband. "We all came back for some kind of ending of cycle or closure."

"You just look at each other and you have flashbacks of having been together," says Mitchell, who has been involved in politics since his "Ironside" days, serving on the U.S. Office of Education's Commission of Presidential Scholars. The nice thing about reuniting, Mitchell explains, was "once you were on the set and rehearsed a couple of times and they said, 'action,' you could look into everybody's eyes and remember how they were going to move and talk and act before they did it."

Bauer retired from acting after "Ironside," married a surgeon and has a 14-year-old daughter. "I am very happy," she says.

But she was thrilled when Burr called her about doing the movie.

"This is what a gentleman Raymond Burr is," Bauer says. "He called and said, 'I am going to do 'Ironside,' Elizabeth, but I am only going to do it if you come back and do it with me.' Of course I knew he was just being a gentleman."

"The Return of Ironside" airs Tuesday at 8 p.m. on NBC.